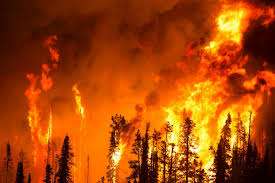 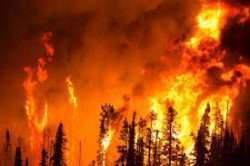 As I look out at the paddocks and rolling hills around our property, I am reminded of the vulnerability of the bush, especially now with temperatures around 35 degrees outside, Camphor laurel trees swaying wildly with the increasing wind and desperately thirsty grass now crispy and brown as far as the eye can see.  It’s a tinder box, waiting to happen!

I had a conversation today with one of my friends who was forced to evacuate her home in the Tewantin area.  She borders the national park, which is thick and dense bushland.

I was carrying out several events at Cooroy on Friday and Saturday.  Observing the dark grey and black plumes of smoke coming from the North Shore area, I was feeling very anxious as well, while concentrating on the event I was running, wondering if I would have to cancel any time soon.   Our clear view revealed an increasingly Smokey out of control situation developing just 20 kilometers away from our property.  A wind change could be catastrophic for the more densely populated areas that are hugging the bushlands.

My friend told me that she was on her day off on Friday 8th November, by early afternoon her drama becomes very real when she was not able to return to her home and her husband gathered up their cat and a few belongings to make their way to an evacuation center.  Turns out a friend was able to house them for the next few nights and even had a room for the cat!  She returned to a house still standing, all clear 2 days later.  She was lucky!

We talked about the toll this took on her, the energy, the stress that everyone was feeling around the collective fires now burning in NSW and QLD, and how vulnerable we all felt, how terrified at the thought of our homes burning down.

Homes full of memories, and possessions that consisted of old photos, videos, special outfits, printed material and the like.  It was too much to take in.  I thought that if I packed an emergency bag, for the same reason that when I take an umbrella it never rains, it’s only when I’m not prepared that something bad happens.  This is what I told myself.

Is that a reasonable thought process?  I tell myself that by having my emergency bag packed, that everything will be okay, or will I too have to evacuate to a library or hall with the rest of my community.

I’ve have been through several cyclones, even sustained structural damage to our home back up in the Rainforest of North Queensland.  If I had a choice between fires, floods, and cyclones, I’m going to take the cyclone, because not all is lost.  Fire, on the other hand, is like a hungry football player, he/she will eat everything, and leave nothing behind!

People are blaming the Government for all this climate upheaval!  I’m not a politically-minded person, however, I am aware enough to know that when you feel a lump on your breast that hurts to the touch, that this ‘lump’ just didn’t arrive yesterday.  This lump, this climate crisis has been incubating for years, and it has a lot to do with ‘you and me’, and the conscious and unconscious behaviors we display every day of our existence.  Our footprint, our presence dictates an outcome that we may come to fear and regret.  Yeah, I’ve watched a bit of David Attenborough in my time!

We dictate the climate by the way we consume, dispose and live.  We have incredible power, it has been there all along, all we need is reminding.

Like wounded, hurt animals we react and seek to blame anyone else but our own ignorance.  I remember reading John Robbins book ‘Diet For A New America’.  The copy I own was published back in 1987.  On-Page 363, “All things are connected”, John writes;

“It is not only American forests that are being cut down to support our meat habit.  An ever-increasing amount of beef eaten in the United States is imported from Central and South America.  To provide pasture for cattle, these countries have been clearing their priceless tropical rainforests.

It stretches the imagination to conceive how fast the timeless rainforests of Central America are being destroyed so Americans can have seemingly cheap hamburgers.

Gosh that was written in 1987, according to John on present course we don’t have many years left!  Our consumerism, our plastic manufacturing, our complete and utter disregard for cause and effect has created this problem.   Politicians work for the people, somewhere along the road everyone neglected to see this.  Politicians work for us!  We are the people!

We are all responsible, we can change things, but it’s going to take a collective consciousness and a bunch of people eating some  ‘humble pie’!  Oh and make that a Vegetarian or Vegan humble pie!

So fast forward to now, and the still looming fires that plague Australia and other parts of the world, we are in an unprecedented predicament.  I’m feeling that mother nature is pissed off with all her kids, and she’s hurting bad.  The earth is heating up and our tolerance is cooling down.

As I pack my emergency and go to bag, (if I have to leave in a hurry), I think about what is important to me, what will matter if I return to nothing.  A thought too unbearable to process.  I pack a passport, my best undies’, a few pictures, a letter that my husband kept from his mother (who passed away several years back), baby photos of our only son, some USB sticks that have photos on them and I can’t remember what else they contain, reading glasses, T-shirts, warm jacket, purse, socks, runners, medical file, some business files, insurance documents, house details, a few of my printed books and my phone.

I feel there is more I should have with me, but I can’t fit it all in.  Then I look down and see my little dog, sleeping beside me on a soft white mat, oblivious to the anxieties and notions that fill my head.    I sigh to myself.  To change the climate, we must first change ourselves.  We must consider the implications of our food choices, it’s never too late to do that!