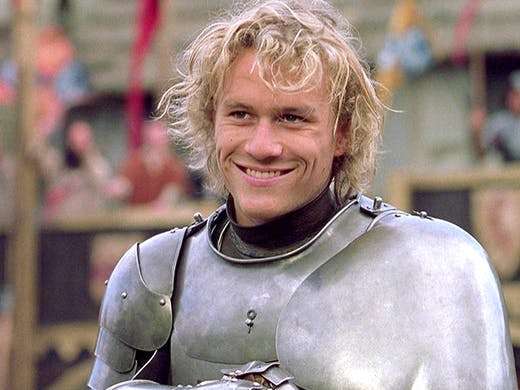 Recently I watched the movie ‘A Knights Tale’ and I was reminded that it was indeed a beautiful movie, which after probably the 5th time I’ve watched it, I got the most out of it.  William (played by Heath Ledger - oh so missed as an actor and a human), was a commoner, who dreamed of better things for himself and those he loved, but in medieval times, a commoner could never become any more than that!  His father in the movie reminded William that he could change his stars if he really believed it.  This message was reinforced throughout the story.  So what is the story?

The Story of ‘A Knights Tale’ – If you strongly believe in something, nothing is impossible, even changing your life’s fate’: this is the message of a humble craftsman for his son William. The order of ‘the world’ is immutable in fourteenth-century Europe: for William it is impossible to think that he can change his life and his destiny, realizing his dream of becoming a knight. The film starts with a genuine knight, leaning against a tree, quite dead.  So William and the two other guys, come up with the idea that William puts the armor on and takes part in jousting with the legitimate (by a birth-nobleman).
In those times when a ‘Knight’ in armor battles another, he is wearing up to 40 kilograms of armor while carrying a lance and riding a horse. This would be no easy task! The participant at this medieval jousting tournament has to break his opponent’s lance or shoulder shield or unseat him.
Imagine the courage needed to take on this sort of sport?  To ride into the armor of a charging force complete with a long pole or stick at a speed that insured either injury or death if it pierced through the gaps in the so-called protective gear!
The story focuses on this one day during a tournament in which horsemen compete in courageous and skillful challenges, fate offers William a chance of redemption. Among the horses’ pawing of the ground, the screaming crowd and the catching notes of Queen’s “We will rock you”, the unknown William turns into the aristocratic Ulrich Von Lichtenstein. William faces the famous champion Michael Jordan, the “best player of the year”. William has to face a brave last-ditch challenge where the odds at stake are pride, power, and prestige.
Watching this movie I’m tinged with a feeling of both sadness and happiness.  The sadness for the loss of such a fine actor in Heath Ledger, and happiness because of the positive message the movie leaves.  Heath’s character ‘William’ is a young man of integrity, that integrity saved the day for him in the end, and the ending was so very satisfying.
Everyone dreams of something of being someone, while the world swirls around us, it may seem like we are not getting anywhere, but when you are in alignment with your true purpose, you are changing your stars.  The purpose isn’t so much about achieving a whole bunch of things, but for me anyway the pausing and the learning along the way; it’s the observation which one can turn into activation that matters.  Changing your stars is possible when you surround yourself with the right people and deliberately place yourself in a better more complimentary environment.  Now some of you may say I can’t change my environment!  I’m stuck with what I’ve got!  For any change to happen, you must recognise that you can start that change within you, then everything else will unravel.
William Thatcher did just that, he put on the armor of the deceased knight, and he took part in a new experience.  You have to watch this film, if you haven’t already, it will uplift you and probably have you grooving along to Queens’, We will rock you.
All actors – Heath Ledger, Rufus Sewell, Shannyn Sossamon, Paul Bettany, Laura Fraser, Mark Addy, Alan Tudyk, Bérénice Bejo, Scott Handy, James Purefoy, Leagh Conwell, Christopher Cazenove, Steven O’Donnell, Jonathan Slinger, Nick Brimble, Karel Dobrý, Philip Lenkowsky, Roger Ashton-Griffiths, Petr Meissel, Matthew Mills, Daniel Rous, Vladimír Kulhavý, Miroslav Mokos, Noel le Bon, Scott Bellefeville, David Schneider, Rudolf Kubík, David Fisher, David St

Movie Quotes: The hope that after you’re gone from my sight it will not be the last time I look upon you.

John Thatcher: If he believes enough, a man can do anything.

William: My pride is the only thing that they can’t take from me.

Jocelyn: Better a silly girl with a flower than a silly boy with a horse and a stick.

“If I could ask God one thing, it would be to stop the moon. Stop the moon and make this night and your beauty last forever.”

Here is a little treat from the movie, ‘the dance scene’, I apologize for the advertisements.  Give yourself a treat.

Here is another treat, the scene where he writes the letter to one he loves. 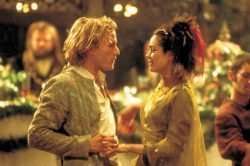 Let me know when you have either watched this movie for the first time or re-watched it like me.