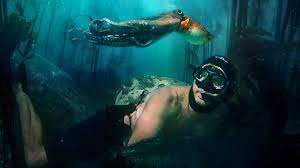 Every now and again you find something worth watching on Netflix and this time it was a documentary.  I thought it was timely to share my thoughts about this film and suggest that you make it your ‘must-see viewing’.  It’s a unique relationship between a female octopus and a man.

While this eight-armed creature is ultimately the star of My Octopus Teacher, it is Foster – the narrator – whose life is radically affected, whose soul is touched and heartbroken by what unfolds. This documentary is about their mutual affection that’s beyond the bounds of science, marine zoology, or environmental awareness, it’s because there’s plenty in it that’s very deep and very profound.

The close-up account of the mollusk’s life is entirely real, set over nearly a year.

Foster, whose professional experience, scientific mind, and sense of purpose add enormous weight to this film, as he explains how, nine years ago, he began a daily regimen of free-diving – with only goggles, fins, weight belt, and snorkel, he started going into the sea every single day. He’d been suffering from a kind

of burn-out, struggling with a sense of purposelessness and he took to the water on a mission to re-energize himself. He says he had a desire to become more like an amphibious animal, and so forswore any wetsuit: There was to be no barrier between himself and the world he entered.  I think I was most taken by his ability to deal with the cold water, and the continual visits to the marine underworld transformed his opinions of many things including himself!

As much as this process allowed him to witness his own body’s adaptations to the harsh cold, he began a life-shifting study of the kelp forest in which he was spending so much time. It is, he tells us, an alien environment – “much more extreme than our maddest science fiction.”  The film gives us a view of an octopus-like never before, with plenty of opportunities to demonstrate the extent of her wit.  She even walks on her tentacles in one part of the documentary.

Foster, who grew up on the edge of the Atlantic and spent much of his boyhood on the shore, and in rock pools, says he was drawn back to the water because those days as a boy had been the happiest of his life. Little did he know that returning to the sea would cause such a profound connection with the creatures that live there – many of them barely known to science.

Following his first meeting with that octopus, Foster wondered if something more might come of their encounter. But how, he asks, do you win the trust of an animal that’s spent millions of years learning how not to be found?

It took persistence and patience. Over time, by returning day after day to where he first met her, Foster not only earns her trust but discovers that she’s curious enough to make the first move. And so an unlikely friendship was established and Foster was – during hundreds of dives – able to capture on film some of the most astonishing events in the life of this secretive, strange, and remarkably smart creature.

As you will see ‘life under the sea can turn into a cruel struggle for survival’. If watching an octopus playing silly-buggers with a shoal of fish sounds far-fetched, wait until you see how she outwits a predatory pajama shark or, in a flash, fashions a makeshift fortress out of shells. There’s enough visual astonishment to turn everything you thought you knew about the common octopus upside down.

When we see her behaving with glints of emotional intelligence, the film transcends our expectations of a nature documentary. A scene in which we first see this mollusk reach out to touch and grip Foster’s hand is as stirring as it is moving. And, by the time our human and the said creature are old friends, and you see her clinging lovingly to Foster’s chest, you kind of know that you really have witnessed a kind of miracle.

I must warn you, it’s a tear-jerker, well it was for me anyway, and I guarantee you will think twice before ordering calamari at your favorite seafood restaurant, as those tentacles are remarkable and worthy of so much respect.  The Pajama shark is the villain in this film, but I realized that the teaching starts and ends with the shark and the way Foster observes the whole year of swimming in that amazing underwater kelp forest.

By the end of the film, we feel as if we’ve known the octopus for years and that’s despite captions alerting us to a more literal passage of time, and Foster’s reminders that an octopus’s natural lifespan is only a year. She must live fast and intensively, he says, because her life is so short.

Living fast and intensively sounds like a phrase you would expect to hear out of the movie ‘The Fast And Furious’, yet here it is this wonderful reminder to live our lives in ‘connection’, to live intensively.  What a worthy ideal, what a wonderful concept to live by.  Trailer

Until next time. Annie Clark.