For The Love Of Seven!

For a long time I have had a deep connection with the number ‘seven’.  I sign contracts on a day that has a seven in it.  We move to homes that have a seven in it, and seven has always felt right for me, 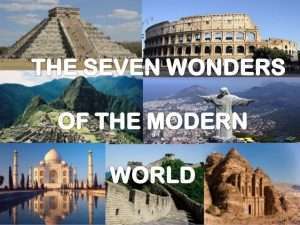 for special events.  I also like the number eight and nine.  What’s so special about seven? Well I did a little probing and this is what I found out.  For starters there are seven wonders of the modern world and seven days of the week…..

So why is seven so special?

There are seven days of the week,

seven colours of the rainbow,

seven notes on a musical scale,

Snow White ran off to live with seven dwarves!

There were seven brides for seven brothers.

Shakespeare described the seven ages of man and he created 7 plays to match that.

Sinbad the Sailor had seven voyages.

I also read that when a certain Ian Fleming was looking for a code for James Bond, he didn’t go for 006 or 008. Only 007 had the right ring.  To top this off, a poll of 30,000 people confirmed that 7 is overwhelmingly their favourite number — with 3 in second place. A remarkable ten per cent of those surveyed gave 7 — from the infinite choice of numbers available — as their lucky number.

I love numbers, and find the very look of them quite symbolic, so why do we prefer some  numbers to others?

What is so special about seven? And how can a number generate such strong emotions and feelings?  I find it so curious that some people, will be dictated by a number!

Our fascination with certain numbers goes back to the dawn of recorded history. For the Ancient Babylonians the most meaningful number was 60. They based their mathematics and calendar around it — and we, many centuries later, have inherited their system. That’s why an hour has 60 minutes, and a minute 60 seconds.  I always wondered about that!

In Ancient Egypt, 12 was considered special. In Egyptian mythology there were 12 realms of the dead. Indeed, 12 crops up throughout history — inches to a foot, pennies to a shilling, months of the year, the number of apostles. A day is split into two cycles of 12 hours.

There are sensible reasons to venerate 60 and 12. Both divide neatly into halves, quarter and thirds, making them ideal units of currency and measurement. But that doesn’t explain why humans are still so hung up on 7 — a prime number that cannot neatly be divided by anything other than itself and number 1.5.

Mathematician Alex Bellos, who carried out the survey as part of research for his book on maths, Alex Through The Looking Glass, says an emotional attachment to numbers — and 7 in particularly — is surprisingly common.   Favourite numbers are usually linked to birthdays, anniversaries or house numbers. But some people have the strangest reasons.

When asked why she voted for 7 in the poll, one woman said: ‘It is a bit awkward; it can’t be equally divided and won’t bend to the rules so easily.’

And that my dear friends is why I like the number 7.