What Feeding Fish Has Taught Me! 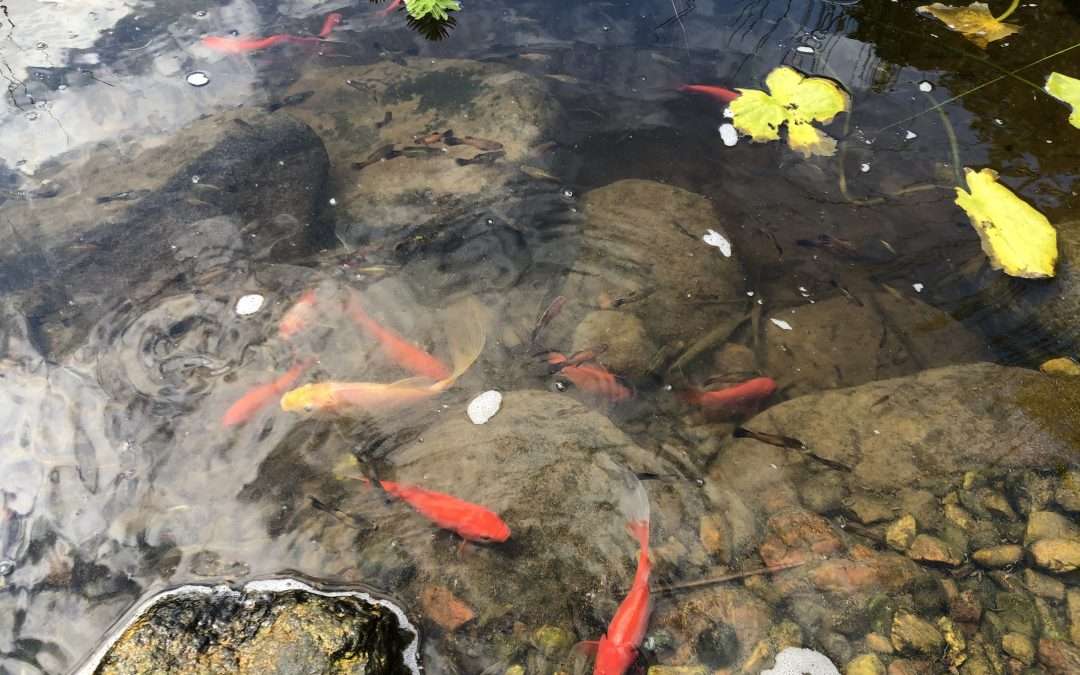 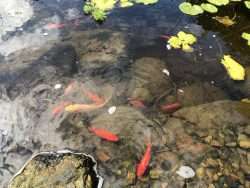 When I approach the pond in the garden, I count the Goldfish, there are 14 at least.  They are cruising in their usual way, so it’s a bit tricky however, they are huge compared with the Guppies so I can count them, I just have to really concentrate and count them in bunches because they move so quick!

It’s been quite a while since I’ve fed them.  I sprinkle the fish food flakes over the surface and watch as the fish make their way to the change in vibration on the water, they know there is something good there for them to eat.

The pace is frantic, quick and yet cautious, my huge shadow must loom above them as I lean over to watch.  When they sense I’m not a threat, they slow down a little and come out from all directions.  The goldfish, especially the one I call ‘Gutsy’, the biggest fish, dominates the food and devours a flake in nanoseconds.  The Guppies circle the flakes and nibble at them several times, only giving up when the bigger fish approach.

Watching these fish reminds me of humans and their behavior at the Boxing Day Sales.  I refer to the humans outside the doors of MYERS just before they open.  You can hear and see humans just chattering amongst themselves cautiously glancing at the sales team behind the glass, looking up at the clock, and then again at staff, alert to every movement.  Waiting for the doors to open they will pounce on the many stands with clothes or the like piled high, they will grab items in haste and push each other out of the way to get to the Sales tables!

The fish will clean up floating food flakes in the pond in quick time, just as the shoppers will empty the store of its SALE items, and then a calm will come back to the store floor.

The last of the shoppers will leave, bags full of ‘not really needed items’, and the fish will have little distended stomachs and are now floating contentedly yet aimlessly until they find a nice shady spot under the lotus leaf, and they will just flap their little fins, and the pond will be once again still.

Feeding fish shows me that fish just like humans have a fear of missing out, of not having enough, it’s a programmed response, that is inherent in the creatures but its more about survival for them. Human’s however, behave that way when they are consumed with fear and adrenalin, it’s a behavior learned, in my opinion.

I’ve never been one for ‘boxing day sales’, the thought of having to compete or move amongst frenzied shoppers just makes me ill, but I can understand every instinct to take part in it also.  I can understand that fish and humans swim together in the pond called ‘life’, and they are only separated by water and oxygen, oh and maybe a few shops!

Feeding the fish has taught me that if you overfeed them, they will not look for food on their own within the pond, the natural weed and organic matter that blows into the water will be overlooked and of course, they could die.

Another thing I’ve learned from feeding fish it’s not necessary to be predictable with feeding the fish, it’s more about being observant, and more a logical thing to feed them when it’s cooler and when I’ve just topped up the water level.

If humans get too much given to them, without any effort of their own, they come to expect it, and when it’s no longer given, that’s when the anarchy begins!

Once I left my own little guppies in the glass fishbowl located on a bench in the house, too long, I forgot to feed them!  Remember these were the fish used to being fed all the time.

My poor little wild fish were forgotten, they forgot how to look after themselves, but I introduced them to the good life and regular feeds.  When the feeding stopped, they had no other response/choice than to eat each other!

I see this with humans today, we are all too comfortable, too spoon-fed, happy to eat each other and push each other out of the way to get to what we want!  Eager to go into a frenzy, look at what happened with the toilet paper purchases recently, probably will happen again!

We need to learn how to find our own food again, yes, it’s an analogy, but I believe its relevant.  Growing food is empowering, being involved with our own food source, tuning into nature and all she has to offer.

Handouts don’t create urgency or creativity, instead, they bread ignorance, complacency, laziness, and an unnatural instinct to harm others which is the opposite of love and compassion.  All lives matter!  That is the only T-shirt I want to wear!

We need to learn from nature, watch it more, be in it more, and if you are feeding your fish, perhaps don’t overfeed them, but keep an eye on the ones that are living the good life in the indoor fish tanks!   Mmm, I lost sleep over those little ones!